Romans did not want to let Kazakh Spartacus go 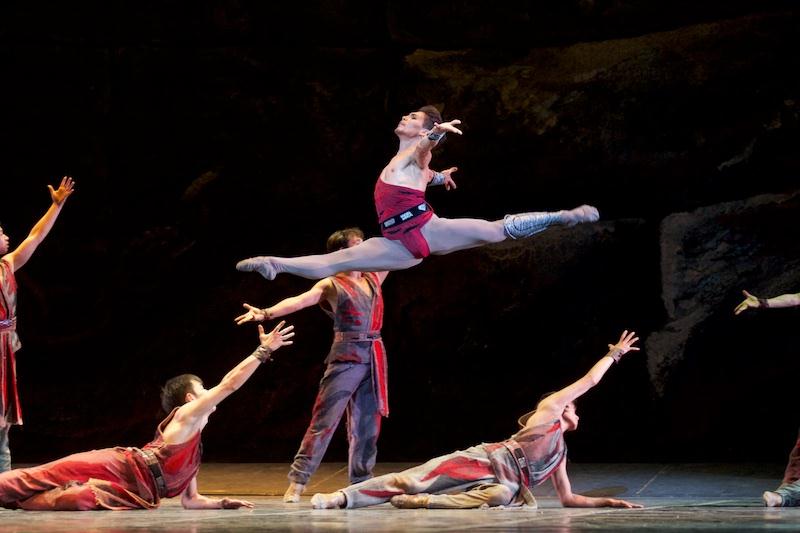 ROME. KAZINFORM - The City of Seven Hills welcomed the Astana Opera Ballet Company not only with hot weather but with equally warm applause: after the dancers presented the ballet Spartacus on July 1 and 2 with extraordinary success, Rome's audience did not let them go for a long time. Thunderous ovations and shouts of ‘Bravo, Spartacus' did not seize in the auditorium until the curtain finally closed. Over more than a century and a half, the celebrated stage of the Teatro dell' Opera di Roma has seen many striking performances, but the Kazakh company was particularly memorable, the Astana Opera House Press Office informs.

"I come to this opera house often, know ballet well enough and I can say that the dancers' level is very high. The jumps of the performer of the title role of Spartacus are incredible. He impressed me so much that I will now definitely find additional information about him, and in general, I will learn more about your country, which I want to visit," Italian actor and singer Carlo Belmondo said. 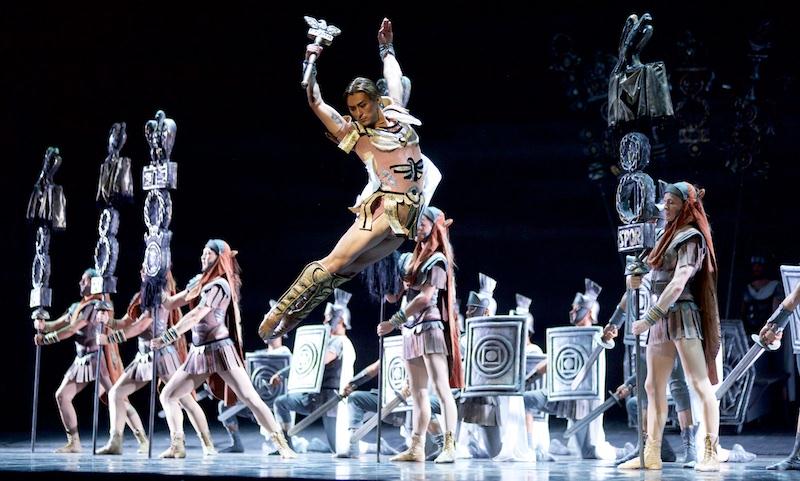 "I loved the staging, it is really deep, the performance was truly spectacular. The artists are also very good; I loved the energy with which they danced. I felt immersed in the situation, in the story presented onstage, as if I was in Ancient Rome, which I really liked. The performer of the main part was magnificent; one could feel the power of his movements. The Astana Opera Ballet 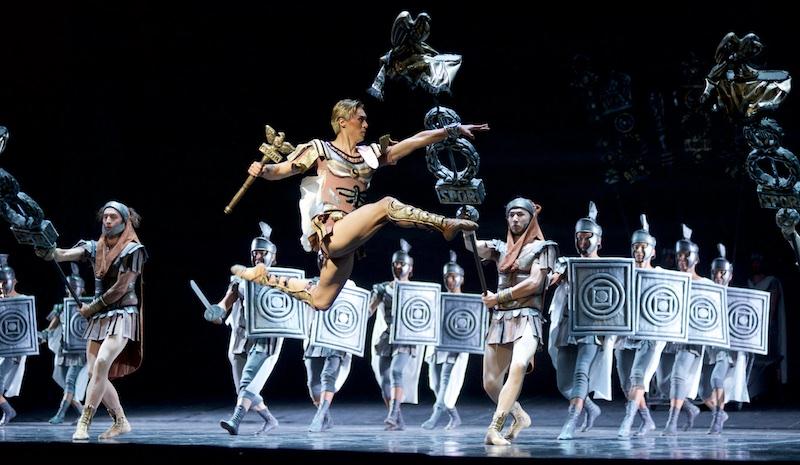 The company, headed by its Artistic Director Altynai Asylmuratova, showed great skill. I would love to go to Kazakhstan, it is a beautiful country," the famous Italian artist with the stage name Fabio2U (Fabio Demofonti) emphasized.

"The ballet Spartacus' last run in Rome was in 1987, so today's performance is a large-scale event for us. We know that the Astana Opera has a very strong ballet company. I believe that Principal Bakhtiyar Adamzhan is the best Spartacus in the world. Bakhtiyar has already performed in Rome on a number of occasions, thus, many people came to see this particular dancer. It is evident that the company is on the rise, the dancers are young, have good training, it becomes especially clear from the corps de ballet, the mass scenes were performed synchronously and harmoniously. The orchestra and the maestro did an excellent job," a resident of Rome Maxim Skobarev shared. 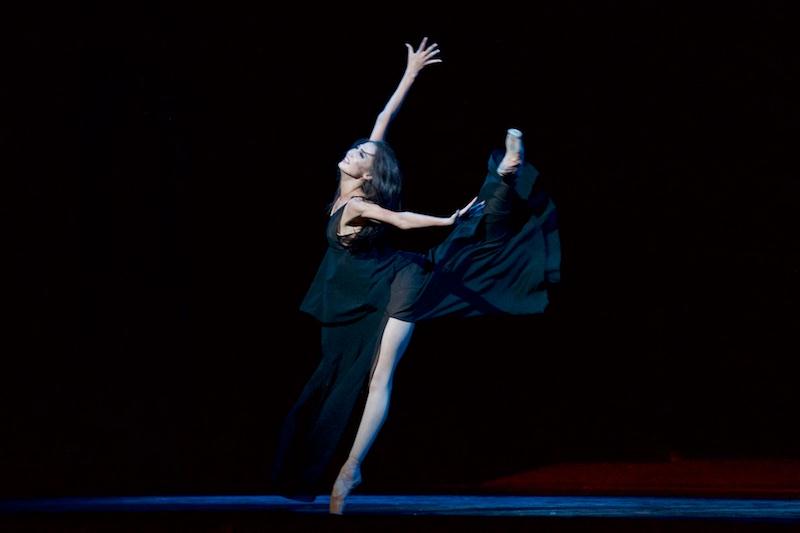 The packed to the rafters auditorium, seating 1600, gave standing applause. After the performance, the audience surrounded the Principals in the opera house's foyer, where the dancers were signing autographs. There were so many people who wanted to get their picture taken with the performer of the title role Bakhtiyar Adamzhan that a long line formed. 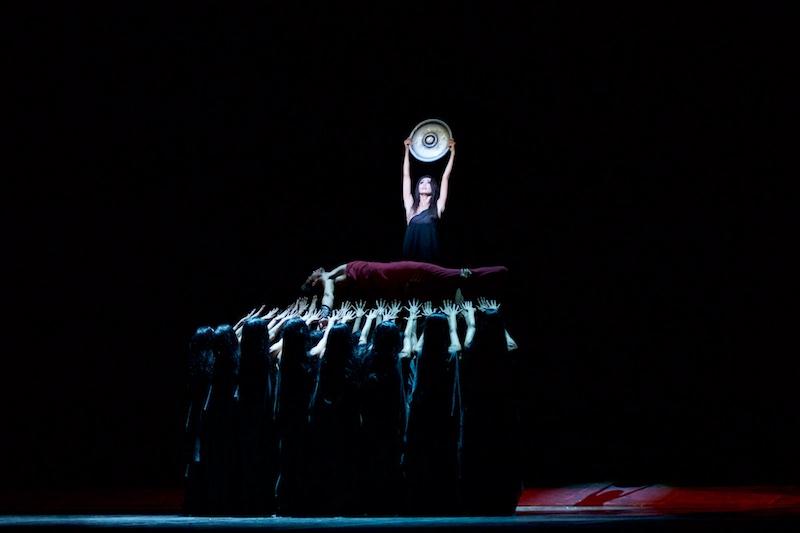 The Astana Opera's Principal Dancer Bakhtiyar Adamzhan is famous for his impeccable technique, and the role of Spartacus in the most beloved in his repertoire. The dancer often recalls that when he first performed the premiere of this ballet on his native stage, his lungs clenched. "The first act ended, the curtain closed, but I could not get air. After a while I could handle it without any problem," the ballet company's Principal laughs. Of course, Bakhtiyar Adamzhan is modest because he truly lives in this role, gives himself to the viewers without any reservations, his airborne jumps delight the audience the world over. He is not afraid to show Spartacus' weakness in moments of despair and doubt, because his hero always remembers the main goal - freedom, which he chooses, already realizing the fatality of this decision. 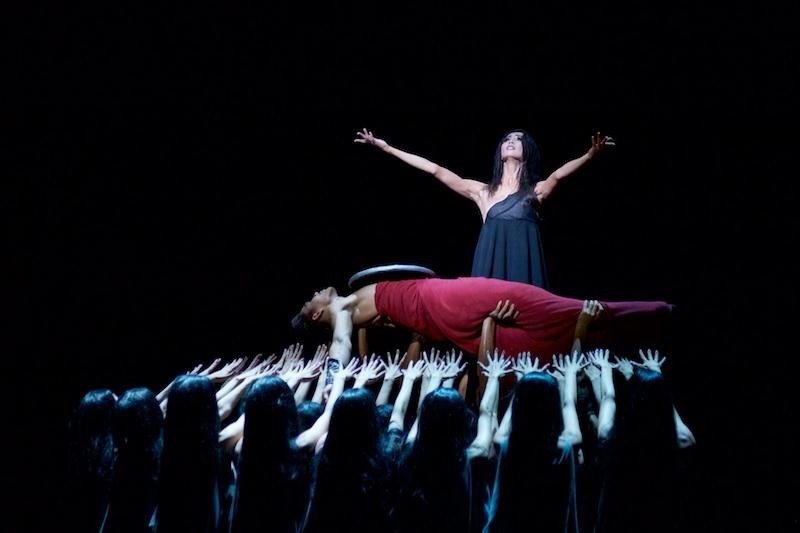 "My Spartacus is, first of all, a man with his strengths and weaknesses. From the first note of the orchestra, I try to show the development of his character in different periods of his life: in love, in battles, in moments of despair... I try to convey the dramaturgy of the portrayal of the protagonist to the audience. I hope that this makes me different from other dancers because lately my hero is perceived by performers only as a warrior and is interpreted one-dimensionally throughout the entire ballet," Bakhtiyar Adamzhan noted after the performance.

Just as warmly the auditorium welcomed the Principal Dancer of the Astana Opera Aigerim Beketayeva. The role of Phrygia suited the ballerina very organically, allowing her to express the lyrical nature of her bright talent. Arman Urazov was very convincing as Crassus. Incidentally, just recently, he became a Principal Dancer in the company. The Roman Consul in his interpretation turned out to be sufficiently cruel, narcissistic and autocratic; he was able to convey the cowardice of this character, which by no means all performers can achieve. His dance is filled with complex jumps, turns, and intricate supports that are executed easily and artistically. The dancer himself admits that, despite the fact that everything looks easy onstage, this part is one of the most difficult in his repertoire, because it requires the artist to convey the multifacetedness of the character.

Assel Shaikenova's Aegina is not just a devious courtesan. This clever, cold, calculating concubine wants to be a part of the Roman nobility, and therefore she needs Crassus to be

victorious, triumphant. It is Aegina that determines the tragic outcome of the battle. Assel Shaikenova is perfectly adept in the classical style choreography. 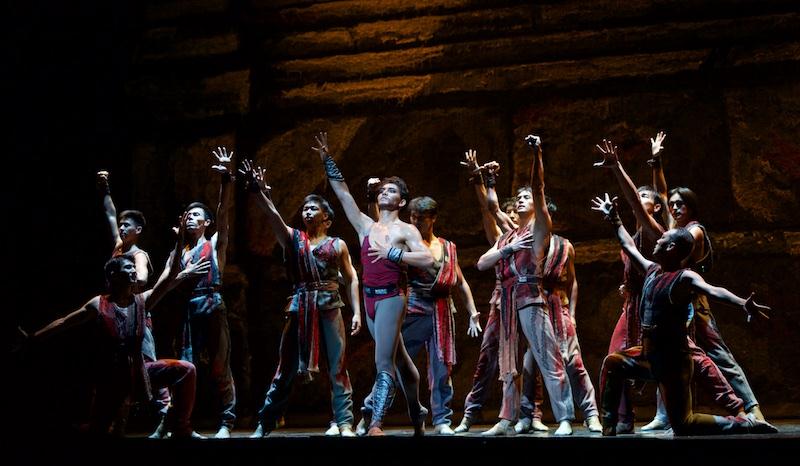 The discerning Italian audience responded with applause to all the complex supports, jumps and turns of the dancers. The audience was particularly excited by the brilliant performance of the choir at the moment when Phrygia finds the body of her deceased husband and mourns him. Suddenly, as if from the sky, female voices sounded and it became difficult for the viewers to hold back tears. 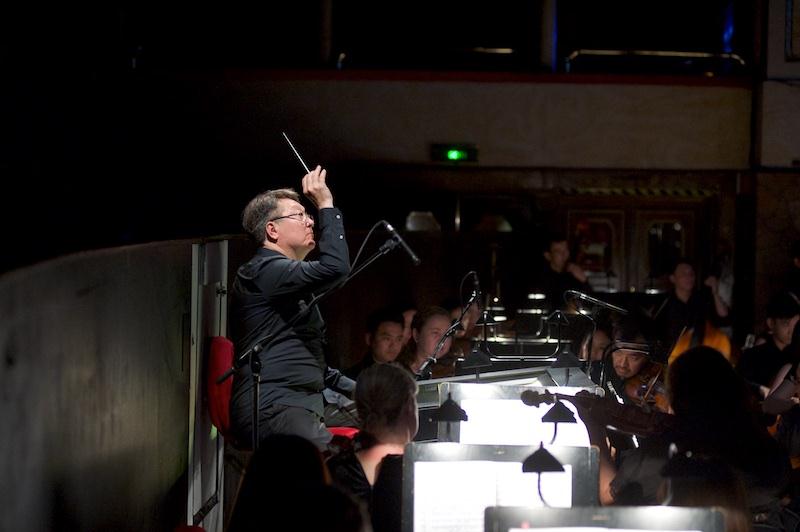 The work of the conductor plays a huge role in a ballet performance. Maestro Abzal Mukhitdinov perfectly coped with his task: he was able to achieve stylistic, intonational and rhythmic preciseness, as well as a wide range of sound.

After the performance, the audience thanked not only the dancers but also the Artistic Director of the Astana Opera Ballet Company Altynai Asylmuratova, who happened to have a large number of fans here. 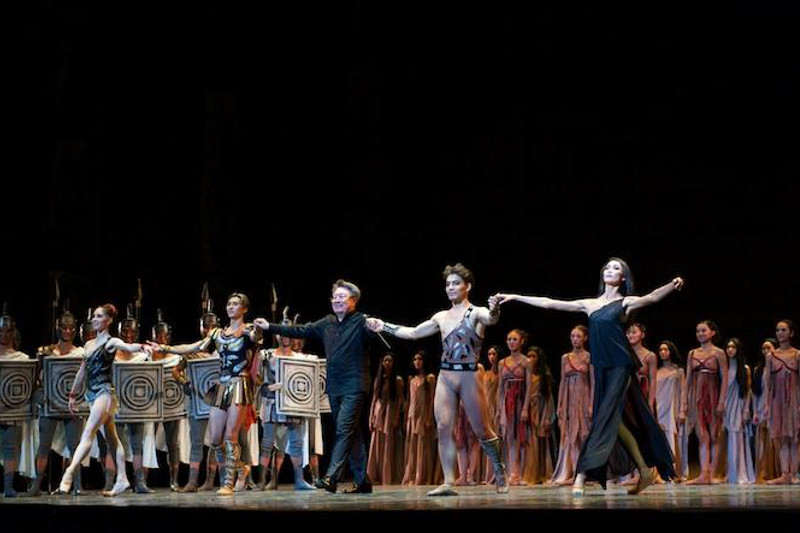 "We had exciting, important performances. The dancers did a good job, the principals showed themselves to be great professionals. I am happy! The viewers and cultural figures approached me and said that they were very touched by the performance emotionally, that they had goosebumps, which is the highest estimation for me. If we managed to cause these emotions in the audience members, it means that our work was not in vain. Performing in Rome, the capital of Italy, on this stage, is certainly not easy, because it is difficult to surprise such viewers. I did not expect a reaction like this, there was a great resonance about our company, about the Astana Opera," Altynai Asylmuratova concluded.

Sergey Nurtayev, Ambassador Extraordinary and Plenipotentiary of the Republic of Kazakhstan to the Italian Republic, and Seit Nurpeissov, the Embassy's Counselor, attended the ballet performance. 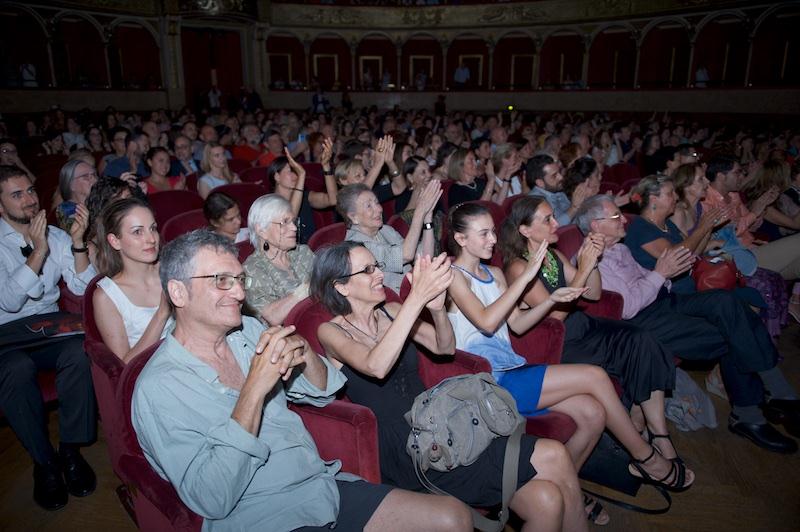 "It is symbolic that the ballet Spartacus was presented here in Italy. I was proud that the skill of Kazakh dancers, the choreography, the orchestra performance - everything was presented at the highest level, which was clear from the unceasing applause of the audience at the Teatro dell' Opera di Roma.

Both days - on July 1 and 2 - the Roman audience enthusiastically welcomed the Kazakh dancers. Let us remind that the next performance of the Astana Opera Ballet Company will take place in Kaunas, Lithuania, where on July 5 a rich Gala Ballet program will be presented. The tour is held under the auspices of the Ministry of Culture and Sports of the Republic of Kazakhstan within the framework of the "Rukhani Janghyru" program. 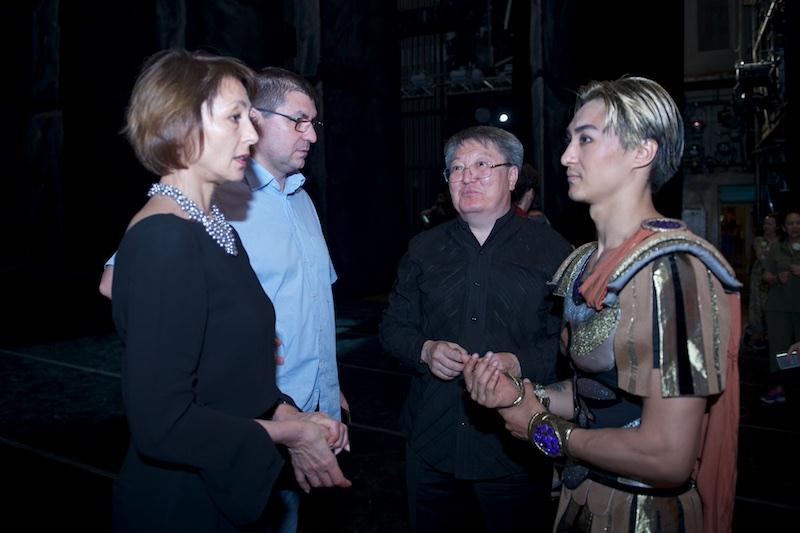 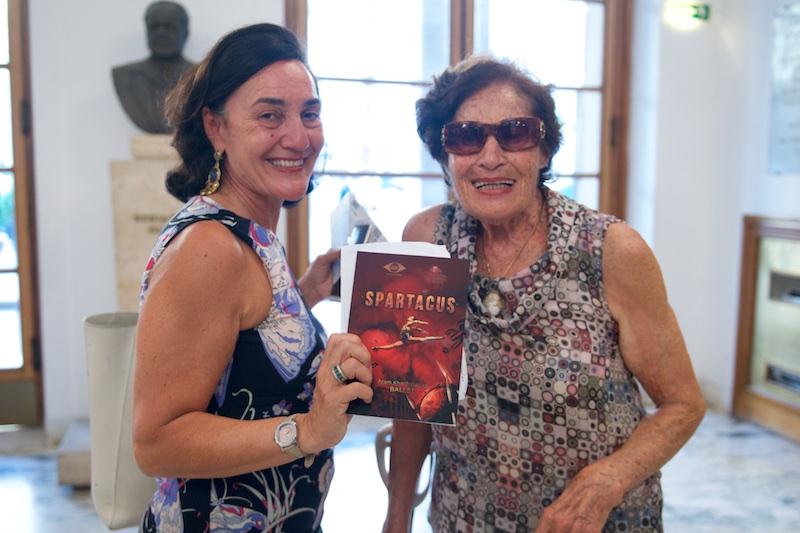 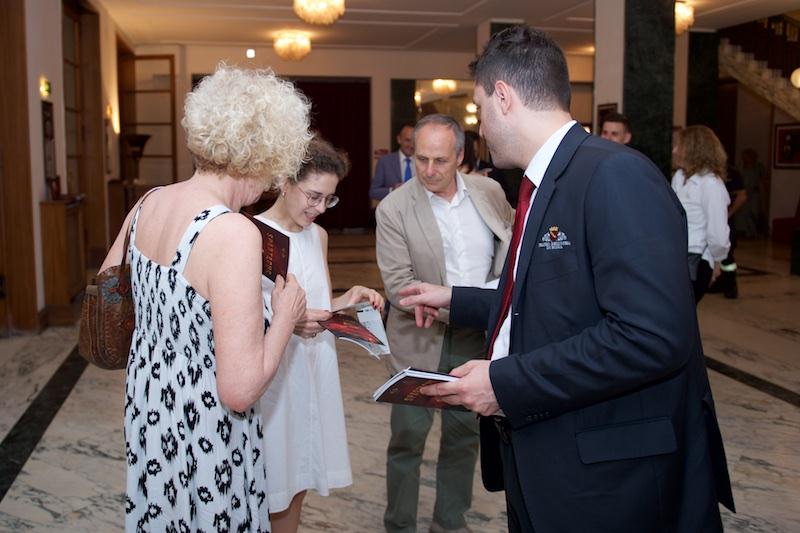 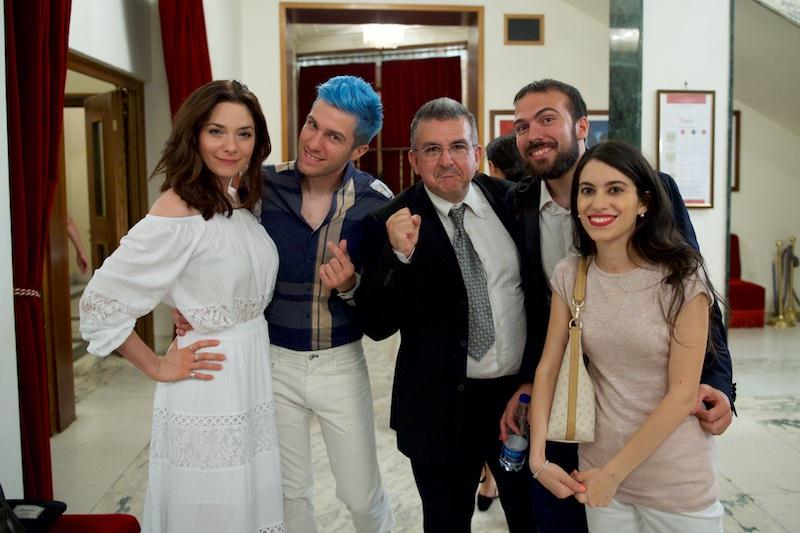