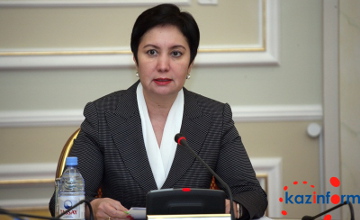 ASTANA. KAZINFORM - Today Secretary of State of the Republic of Kazakhstan Gulshara Abdykalikova has chaired a session on the issues of preparations for the International Conference themed Building world without nuclear weapons dedicated to the 25th anniversary of shutting down the Semipalatinsk nuclear test site.

Participating in the session were reps of the Presidential Administration of Kazakhstan, members of the Government, senators and other authorized state bodies.

At the session Secretary Abdykalikova stressed that one of the first decrees inked by President Nursultan Nazarbayev was the one on closing the Semipalatinsk test site.

"Throughout 25 years of Kazakhstan's independence President Nazarbayev paid utmost attention to the issues of nuclear disarmament and non-proliferation.

Nursultan Nazarbayev's speech Manifesto: The World. The 21st century dedicated to these problems and delivered at the Nuclear Security Summit in Washington on March 31 sparked intense public interest. It outlines Kazakhstan's stance on and addresses many vital issues that are of interest to mankind.

The International Conference themed Building world without nuclear weapons will be held under the aegis of the 25th anniversary of Kazakhstan's independence," she said at the session in the Akorda presidential residence.

In conclusion, Secretary Abdykalikova gave a number of instructions to those present.