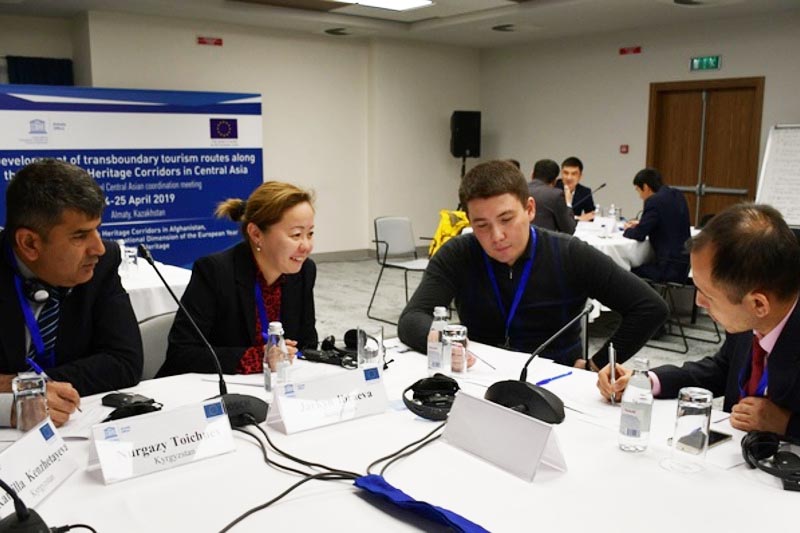 ALMATY. KAZINFORM On 24-25 of April 2019 the first Central Asian coordination meeting was held in Almaty within the framework of the European Union and UNESCO partnership project "Silk Roads Heritage Corridors in Afghanistan, Central Asia and Iran - International Dimension of the European Year of Cultural Heritage".

The meeting brought together representatives of the Ministries of Culture and National Commissions of Kazakhstan, Kyrgyzstan, Tajikistan and Uzbekistan for UNESCO, experts on cultural heritage and tourism, as well as experts from the tourism industry in Central Asia, the Almaty UNESCO Cluster Office's official website reads.

Mr. Johannes Stenbaek Madsen, the Head of the Cooperation Section of the European Union Delegation to the Republic of Kazakhstan, participated in the meeting. In his opening address, he highlighted the importance of cultural and creative industries, saying that the creative economy was made of the culture and the creative industry sectors that generate annual global revenues of over 250 billion dollars and according to the recent forecasts, in the coming years, these sectors would comprise 10% of world GDP. He reminded that EU was a state-party to the UNESCO 2005 Convention on the Protection and Promotion of the Diversity of Cultural Expressions from 2006. He also underlined that the development of culture and tourism helped to create the largest number of new jobs.

Ms. Krista Pikkat, Director of UNESCO Almaty Office and UNESCO Representative to Kazakhstan, Kyrgyzstan and Tajikistan in her welcoming speech said that UNESCO was proud to partner with the European Union, whose priorities and focus of the European Year of Cultural Heritage in 2018 very much resonate with UNESCO's goals to recognize the important role that cultural heritage plays for social cohesion, for the promotion of trust and mutual recognition, and for strengthening the identities and livelihoods of the communities. She also mentioned that tourism today was a rapidly developing sector of the world economy and Central Asian countries had great potential for tourism development, including tourism based on cultural heritage.

The participants discussed tourism potential of each Central Asian country, the most attractive features, as well as difficulties faced by the tourism sector. During the meeting, UNESCO approaches to the development of sustainable tourism based on World Heritage and results of a survey on the development of tourism in Central Asia were presented, and the participants developed options for a new transboundary tourism route along the Silk Roads.

As a result, four ideas of the new routes that include elements of cultural tourism, ecotourism and gastronomic tours were developed. Inspired by this exercise participants started sharing their visions on the opportunities that their countries could reach in 2030, when the new Silk Roads routes would become popular world destinations.

They also highlighted that development of tourism overall and tourism based on cultural heritage could contribute to creation of new jobs and improving livelihoods of local communities.

One of the topics of the meeting was legislation on the transboundary tourism: in particular, the participants considered the possibility of establishing a common Silk Roads visa to travel around Central Asia. Representatives of the Ministries of Culture also shared their experiences in managing cultural heritage properties and attracting tourists to their countries.

Participants were inspired to work further in the field. When discussing ideas for the future, the participants mentioned: opening a research department on historical and cultural heritage, cooperating closer with travel agencies, solving problems in the management of cultural properties, raising awareness of the local communities on cultural heritage and launching a separate webpage about UNESCO World Heritage properties on tourism online platforms.

The first coordination meeting was an inspiring starting point for transboundary tourism routes development in Central Asia. The ideas of new itineraries need to be further discussed and developed but the participants of the meeting had an opportunity to develop a network between countries and organizations and can continue cooperation and further discussion on possibilities for development of transboundary routes along the Silk Roads in Central Asia.