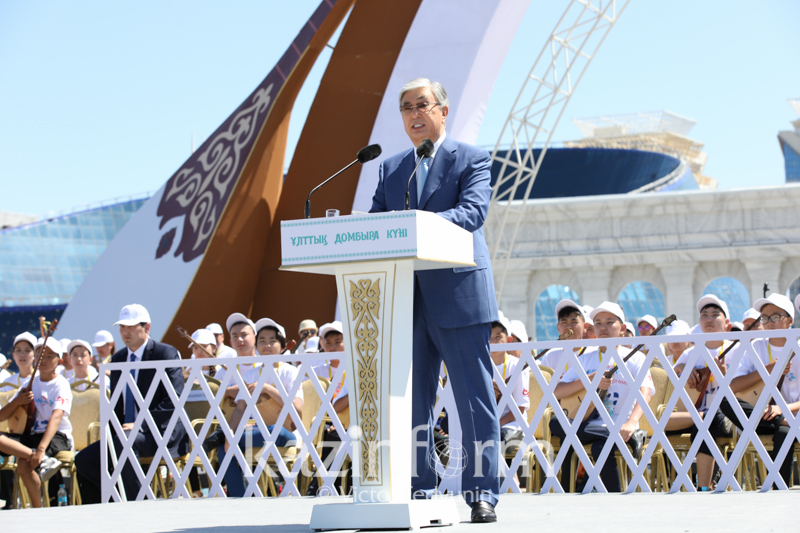 NUR-SULTAN. KAZINFORM President of Kazakhstan Kassym-Jomart Tokayev visited the solemn Dombra Day concert in the capital city of Kazakhstan and congratulated all Kazakhstanis on the National Dombra Day.

The Kazakh Yeli square turned into the large concert venue bringing together all those playing dombra. This year six kyuis were performed.

All those willing without any age limits may take part in the grandiose event. Those attending should have good dombra playing skills to perform kyuis such as Saryarka, Adai, Alkissa, Konil tolkyn, Balbyrauyn, and Koreguly by heart.

Besides, the Kazakh ethnic auyl featuring Kazakh yurts will unveil on the square. Various types of dombra and other national instruments will be displayed there.

Another highlight is that the Kazakh orchestra and State Academic Philharmonic musicians will give a concert on the Yessil River bank. The event will start at 06:00 p.m. Entry is free, the press release of the culture and sport department reads.

Last year, above 2,000 musicians took part in the National Dombra Day concert. Dombra players arrived from all corners of the country to attend the flashmob.

The National Dombra Day was established in 2018 by the decree of First President of Kazakhstan-Leader of the Nation Nursultan Nazarbayev. It is marked on the first Sunday of July.