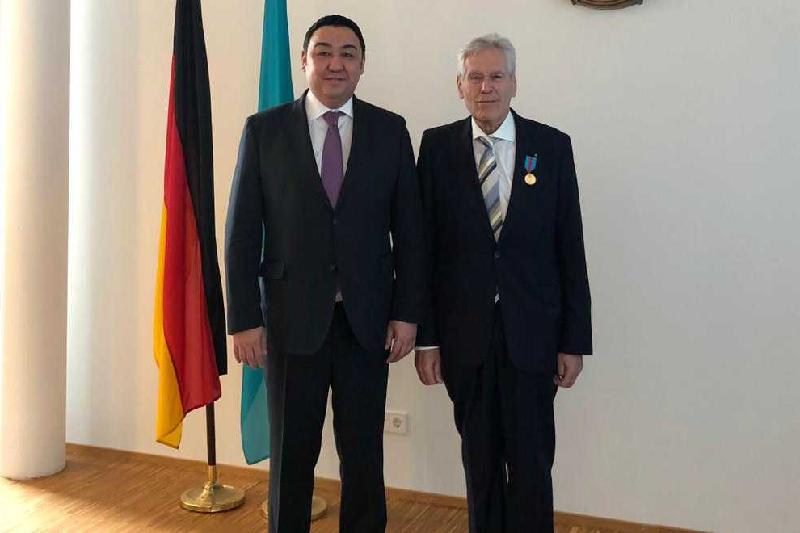 MUNICH. KAZINFORM - The Ambassador of Kazakhstan to Germany Mr. Bolat Nussupov presented the prominent German politician and former Federal Minister of Economics and Technology Mr. Michael Glos with the medal "25 Years of Independence of the Republic of Kazakhstan" for his contribution to the development of Kazakh-German relations, Kazinform has learnt from the press service of the Kazakh MFA.

The jubilee medal, established in 2016 by the President of Kazakhstan, Nursultan Nazarbayev, was presented during an official ceremony in the Kazakh Consulate in Munich before a gathering of German socio-political and business figures.

Noting the significant contribution of the German politician to the formation and expansion of political and inter-parliamentary dialogue between the two countries, as well as the development of bilateral trade and economic relations, the Kazakh diplomat thanked Mr. Glos for his many years of friendly cooperation and his involvement in Kazakhstan and bilateral relations.

Expressing gratitude to the Head of State for such a high award, Mr. Glos emphasized the presence of great potential for the further development and diversification of bilateral relations between Kazakhstan and Germany. In particular, he referred to the development of new partnerships in raw materials and technology sectors, expansion of investment cooperation, and the implementation of the German model of dual education in Kazakhstan.

In this context, the German politician gave assurances that he will continue to make every effort to further strengthen political dialogue and economic cooperation between the two states.

German politicians and businessmen participating in the ceremony agreed that the intensification of Kazakh-German economic cooperation will certainly contribute to solving the tasks of economic diplomacy as set forth by the President of the Republic of Kazakhstan Nursultan Nazarbayev.