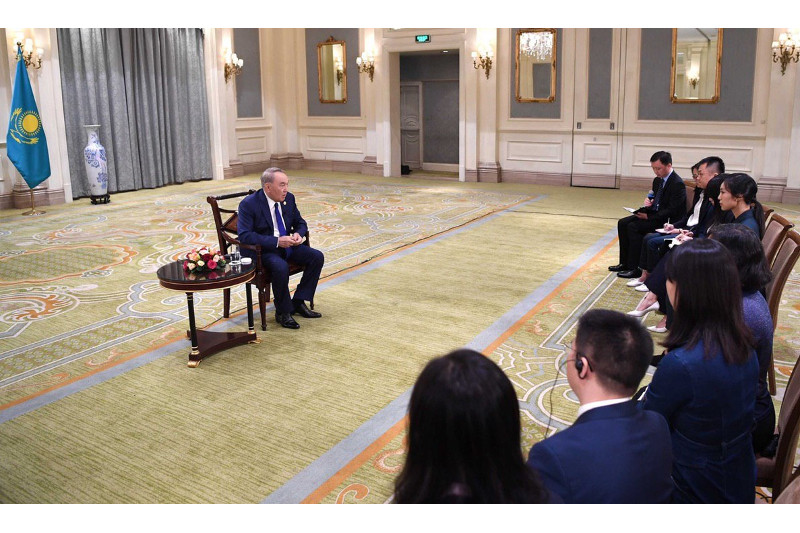 BEIJING. KAZINFORMThe first President of Kazakhstan Nursultan Nazarbayev on Friday hailed the China-proposed Belt and Road Initiative (BRI) as "a very great idea that has a perspective," which mankind can rely on to achieve further integration, Xinhua reports.

In a joint interview with Chinese media on the sidelines of the Second Belt and Road Forum for International Cooperation (BRF), Nazarbayev said Kazakhstan immediately joined the construction of the Belt and Road, after the "completely new and very important initiative" was put forward in 2013.

Good synergy has been developing between Kazakhstan's Bright Path development plan and the BRI, said Nazarbayev.

The BRI "has had a tremendous impact on Kazakhstan," he said, noting that currently there are six railways and 11 highways passing through the country within the BRI framework.

Nazarbayev also mentioned the logistics base in China's portal city of Lianyungang, which connects the landlocked Kazakhstan to the Pacific Ocean through freight trains.

"Thanks to these routes, Kazakhstan has become a country that can reach all the seas. Cargoes from the country can go to all the countries around the world," Nazarbayev said.

China and Kazakhstan have signed contracts for the construction of 55 projects, which will be of great benefit to Kazakhstan, he said, adding that "thousands of people will get jobs."

According to Nazarbayev, Kazakhstan needs industrial development to shift from the pattern which much depends on rich natural resources. "Currently the country is building up its industry together with China ... A jointly built automobile factory is already operating in Kazakhstan."

The first president also sees the possibility of a broader integration between the Eurasian Economic Union and the BRI. "Many countries would like to join the BRI in order to communicate more, trade more," Nazarbayev said.

The initiative is "very beneficial for the prosperity of all countries," as more than 150 countries and international organizations are connected within the framework and enjoying great benefits, he said.

Congratulating the Chinese people on the 70th anniversary of the founding of the People's Republic of China, Nazarbayev noted that over the past 70 years, China has undergone continuous development, achieved great prosperity and has become the second largest economy in the world.
Its 40 years of reform and opening-up has brought the country earthshaking changes and has had a positive influence on the whole world, Nazarbayev said.