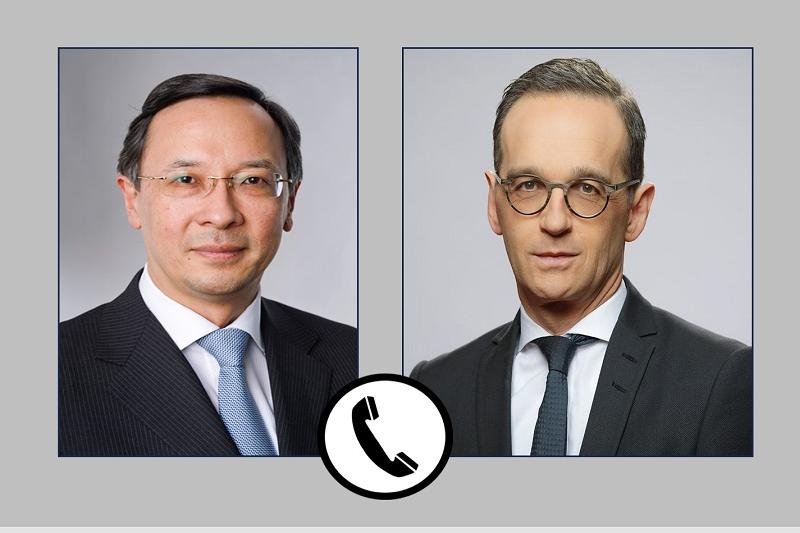 During the conversation, the interlocutors underlined the steady and progressive dynamics of the relations between the two countries that reached the level of strategic partnership, and mentioned the friendly and trust-based dialogue, including at the highest level, between Kazakhstan and Germany.

The sides discussed the further development of cooperation between Kazakhstan and Germany, as well as the implementation of the arrangements reached following the talks held between presidents Nursultan Nazarbayev of Kazakhstan and Frank-Walter Steinmeier of Germany in Astana in July 2017.

A considerable set of economic and investment agreements covering 21 projects worth over $1 billion, which were signed during last year's visit of the German leader, has already borne first fruit. Thanks to joint efforts, in 2017, the trade value approached EUR 5 billion and over 90% of German investments are oriented to the non-resource sector of Kazakhstan's economy.

According to Mr. Maas, Kazakhstan is a crucial partner and Germany is ready for further intensification of cooperation. He highly appreciated the importance of the Fifth Caspian Summit held in Aktau and the signing of the Convention on the Legal Status of the Caspian Sea, the adoption of which unlocks new prospects for expanding economic cooperation.

The interlocutors expressed mutual interest in implementing joint projects aimed at the economic modernization and industrialization of Kazakhstan. In this context, Mr. Abdrakhmanov invited the German side to be more active in capturing new opportunities coming from the launch of the Astana International Financial Centre, the Park of IT Startups, and the International Center for Green Technologies and Investment Projects. The side agreed on the importance of ensuring a favorable investment climate for business communities.

Besides, they emphasized the essential role of one million Germans who had emigrated from Kazakhstan to Germany and 200,000 ethnic Germans living in Kazakhstan as a "bridge" between the two countries.

The Kazakh Foreign Minister underscored Germany's weighty contribution to the development and implementation of the 2007 European Union Strategy for Central Asia, which laid a solid foundation for cooperation between the EU and Central Asian countries. Kairat Abdrakhmanov said that Kazakhstan will exert every effort to ensure maximum efficiency in the implementation of the new Strategy the European Union is expected to adopt next year. In this regard, the diplomat informed his German counterpart of the submission of Kazakhstani proposals on the document content to the respective bodies of the European Union.

The ministers had an in-depth exchange of views on topical issues of the international agenda, including Syria peace settlement within the framework of the Astana Process and the situation on the implementation of the Joint Comprehensive Plan of Action on Iran's nuclear program.

The interlocutors highlighted the new qualitative nature of the multilateral interaction between Kazakhstan and Germany on the global stage. The Kazakh Foreign Minister congratulated his counterpart on the election of Germany to the UN Security Council and stressed that Kazakhstan, as a country that has been actively participating in the work of the Security Council over the last two years, is interested in continuing close cooperation with new members of this most important body of the world politics on all topical issues of the international agenda.

In conclusion, the foreign ministers discussed the schedule of the forthcoming bilateral contacts at various levels. Kairat Abdrakhmanov invited Heiko Maas to make a visit to Kazakhstan.